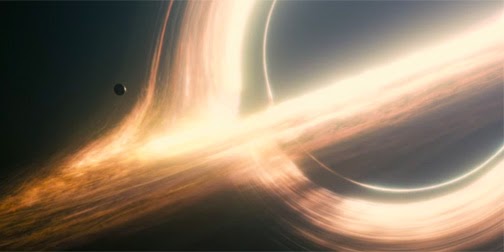 A Review of Interstellar

Pop quiz: Name as many characters from 2001: A Space Odyssey as possible.

Chances are most people reading this review were able to come up with HAL 9000, just plain Hal, or “that computer that kills people.” Even those who have not seen the film are familiar with HAL. HAL 9000 is an icon of cinema, the cybervillain in one of the most celebrated films of all time. Chances are most people were not able to name any other characters in the film. I struggled for several minutes before playing scenes from the film in my mind before finally coming up with Dave. Dave is the protagonist and has significantly more screen time than Hal, yet Hal is far more memorable. It is almost paradoxical that a film depicting the progress of mankind from “dawn of man” to advanced space exploration features no extraordinary human characters.

Yet, it is fitting for the film. 2001 is about the evolution of mankind as a whole. The film is merely a few snapshots in time, seemingly insignificant compared to the many thousands of years of existence. Even this existence of mankind is insignificant when juxtaposed with the vast expanse of space depicted in the film. In the film, man would not even exist were it not for the monolith, the massive tombstone-like object that is undeniably a machine in Arthur C. Clarke's novel version of 2001. Not only is man dependent on machine to survive in space, but man would not exist at all if not for machine prompting apes to evolve. So, it is appropriate that the most memorable character in the film is HAL, a machine attempting to end human life.

It is inevitable that Christopher Nolan's Interstellar draw comparisons to 2001. It is a space film, after all, and Nolan cites Kubrick as a massive influence. Nolan even references 2001 in Interstellar. TARS, a robot at times shaped like a monolith, jokes about shooting humans out of the airlock and into space. He is programmed with a humor setting and he does all possible to help humans. Interstellar may be compared to 2001, but looking beyond the fact that both are set in space reveals vastly different films. Because 2001 has few notable human characters, the audience watches with cold distance, almost like HAL watches the astronauts. The film is set in the vast nothing of space. The audience is meant to be distant.

Much of Interstellar is set on planets. The audience is carried on a journey not only through space, but to planets both beautiful and terrifying, including near-apocalyptic Earth, an ocean planet (complete with massive tsunamis), and a treacherous cold world that would make Hoth seem like Hawaii. The audience is part of the journey, shot with intimate intensity that is the polar opposite of Kubrick's gentle waltz through space that the audience watches like ballet spectators.

Of course, the obvious difference between 2001 and Interstellar is the humanity. The basic premise of Interstellar is that Earth will soon be inhabitable, and the human race must look to other planets to survive. Cooper (Matthew McConaughey) leaves his family behind to search for a planet inhabitable by humans. One potential planet is near a black hole, which means that time travels slower (real science!). When he returns to space, 23 years have passed, but Cooper has aged only hours. On the space ship, he watches videos transmitted by his family over the years. Knowing he missed decades of time with his family, Cooper breaks down. Yet, he keeps his eyes on the videos, tears streaming down his face. This heartbreaking moment is one of many truly emotional scenes in the film. In 2001 the only emotional scene is when HAL is deactivated, a moment that evokes more pity than sadness.

In a space film that deals with the doom of the human race and mind-bending astrophysics concepts such as wormholes, black holes, and higher dimensions, Nolan has embedded a simple father-daughter story. It's the true brilliance of Interstellar. This relationship transcends time and space. Ultimately, science and technology are not sufficient to save humanity without Cooper's unconditional parental love. Numerous web sites have called Interstellar “the new 2001.” Yet, because of its clear focus on family, in terms of 60's films, Interstellar may have more in common with Mary Poppins than 2001.

Upon release, countless web sites, bloggers, and tweeters have pointed out the scientific flaws in Interstellar, down to the incorrect shade of yellow surrounding the black hole. Clearly, these people have missed the point. Interstellar is a brilliant film, not because it tackles the work of astrophysicists, but because it is a story of humanity and family within this mind-bending plot. The science is not the focus, merely the canvas for a family portrait. It's a sign of a truly special film when so many people attempt so intently and relentlessly to discredit it. No one who watched it, whether they loved it or hated it, will forget Interstellar. It is a film that, like Cooper's relationship with his daughter, will transcend time, and certainly transcends the genre of space film.