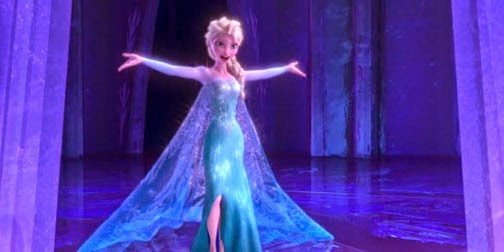 A Review of Frozen

“Let it go.” I hear it on the radio. My kids, who have only seen the film once, sing it. Teenage boys sing it. “Let it go” is a sensation. So is, of course, the film it originates from: Frozen. The film has been heralded as the transformation of the Disney princess. Internet memes proclaim Frozen as the first Disney film to teach girls that they do not need a man to save them. Every girl, small and grown up, and many boys, small and grown up, are obsessed. It's easy to see why. The catchy songs. The cute snowman. The catchy songs. “Let it go.” Disney struck gold and the hearts of girls everywhere. But, has the film really transformed the Disney princess? If we melt away the ice, we see the same old Disney.

First, let's tackle the “man” issue. With no concern for subtlety, the beginning of the film highlights the oppressive patriarchy in which the princesses live. Elsa's father convinces her that her freezing powers should be hidden. It's told so explicitly, and so many times, that I momentarily hated all men. But, lack of cinematic subtlety aside, the theme of the oppressive male is set. Years later, after the parents are deceased, Elsa's younger sister, Anna, falls in love at first sight. Elsa cautions Anna against those feelings. Sure enough, the prince Anna thought she loved has evil intentions. The old notions of love at first sight and happily ever after have been challenged. Thus, the memes about girls not needing a man.

The memes, of course, ignore Kristoff. He kisses Anna at the end. It's not explicitly happily ever after, but it still appears that way. More importantly, he is crucial to the plot. He helps Anna significantly. The girls do need a man. He has a less prominent role, but it is crucial. He is not a prince, of course, but an ordinary guy. This theme was perhaps groundbreaking twenty years ago with Aladdin, but not now.

The memes also ignore Brave. While Frozen explored love between sisters, Brave tackled mother-daughter relationships. In Brave, men get in the way, rather than help the women. So, why is Frozen getting highest praise, while Brave is being ignored? Brave's princess is a red-haired scotch tomboy. With Frozen, Disney returned to the more feminine, stereotypical beauty for its heroines. Therein lies the reason feminists should hate Frozen. Anna and Elsa are gorgeous princesses, unhealthily skinny (setting the standard for young girls!), allegedly from some Nordic land but essentially American. Frozen is not a transformation, it's a step backward.

Let's explore “Let it go.” In the film, Elsa sings the song at a transformational moment. She decides to leave her kingdom for a land where she is free to use her powers. She builds an ice castle in her new “kingdom of isolation.“ “Let it go” means let everything else go, “turn away and slam the door.” Quite literally, the song and the sequence, which is the most sung and most memorable part of the entire film, explicitly say that Elsa (and girls) are free to be themselves, so long as they do so in isolation. Use your powers, but do it elsewhere. Be yourself, but don't disturb society.

Yes, Elsa eventually returns to her kingdom, where she uses her powers to build an ice rink. This small gesture seems to reverse the message of “Let it go,” but within seconds, the credits roll and “Let it go” immediately plays. The film leaves us with that message, returning to the “kingdom of isolation” where girls can be themselves. It is no coincidence that the song is featured at the beginning of the credits, that it was performed at the Oscars, and that girls everywhere adoringly sing the song. Disney chose to feature that song, rather than any other, to submit it for the Oscar, and to promote it. Disney chose the message of expression only in isolation. Frozen is about as feminist as Hooters.

Films actually do exist that send truly positive messages to young girls, but we should not be looking to Disney to make them. How about The Wizard of Oz? Dorothy gets by with a little help from her male friends, but she runs the show. She stands up to the Wizard, and she kills the Wicked Witch of the West. She liberates the Munchkins and the flying monkeys. And, as Glinda points out, Dorothy always had the power to go back to Kansas. Despicable Me, believe it or not, also has a wonderfully feminist message embedded within. Three small girls transform an evil villain into a loving father. That's power.

My personal favorite example of feminism in children's film is the overlooked Monsters vs. Aliens. Like Frozen, it challenges the normal Disney notions of romance. Susan, on her wedding day, encounters a UFO. She grows into a giant. When she later returns to her fiance, he is unwilling to accept her giant stature. She soon realizes that her fiance held her back. Without him, she realizes that she is “amazing.” Another scene plays on the traditional sci-fi teenage couple in a parked car. In a reversal of roles, the girl is dissatisfied that the boyfriend is scared of making love.

Besides challenging romantic norms, Monsters vs. Aliens provides a truly positive message for young girls. Susan is not a princess. She is thirty feet tall with ghost-white hair. She is labeled a “monster.” She is as different as can be. At first, she is afraid of her appearance. She still desires a “normal” life. However, Susan soon realizes that her differences are powerful. “I did it! Did you see how strong I was?” She breaks through walls and escapes from an impenetrable force field. She realizes her potential and vows never to short change herself again. Susan does not have to “let it go, turn away and slam the door.” She can be herself without isolation. She uses her once-feared power to save the world, rather than run from it.