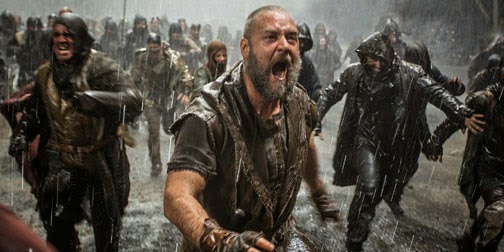 A Review of Noah

“The Creator.” In Noah, it's used in place of the “G” word that appears in every English Bible but writer/director Darren Aronofsky's. Sure, it seems ridiculous that a two hour-plus biblical story could go without mentioning Yahweh in some form or another, but Aronofsky, who previously brought us lesbianism in Black Swan and brutal violence in The Wrestler, pulled it off. Instead of that “G” word, we have “The Creator,” this mysterious being who formed the heavens and the earth from nothing, who is worshiped by believers. “The Creator” is simply a catchy name; a buzz phrase that avoids the truth. Clearly, Noah is not concerned with Biblical accuracy, or even fitting within any sort of widely accepted notions of Christianity. Rather, Noah is an outlet for Aronofsky to push his ultra-conservative agenda.

The constant acknowledgment of “The Creator” embeds in the audience's subconscious a popular buzz phrase among uber-right wingers: the “Job Creator.” These equally mysterious beings form jobs from nothing, and are worshiped by Fox News. “Job Creator” is a buzz phrase that avoids the truth. Just as “The Creator,” and indeed the whole film, suggest, this supreme being creates and destroys, nothing more. Noah (Russell Crowe) makes all the decisions, while “The Creator” just hangs out in the sky and sends the rain. Any Christian will testify that He does much more. Likewise, “Job Creator” suggests that these beings simply create jobs. Obviously, this ignores the other important tasks these people perform, such as causing recessions, making billions doing nothing but allowing a supercomputer to make stock trades, and, as 1% of the population, possessing 45% of the nation's financial wealth. So, as ultra-conservatives sell the “Job Creator” short, Aronofsky undervalues “The Creator.” However, my task is not to criticize Aronofsky, but to unmask his ultra-conservative propaganda.

After he has the dream that alerts him to “The Creator's” plan, Noah gathers his family and pays his grandfather, Methuselah (Anthony Hopkins), a visit, to understand what he must do. Where does the answer lie? In a cup of tea, of course. The contents of the tea lead Noah to discover his task. The message is clear: The Tea Party has the answers to the survival of our very society. We must figuratively drink the tea with our votes, for the sake of America, and, given our unsurpassed importance on a global scale, for the sake of humanity.

Aronovsky uses Noah to promote several key points of the Tea Party platform. When the ark is nearing completion, Noah travels to the evil men's encampment in an attempt to find his younger sons wives. He decides that there will be no wives, since all are evil. This is clear evidence of the general xenophobia that pervades the ultra-conservatives, in their views on immigration reform. The disallowing of foreign women to wed Noah's sons represents the widely-held view that all illegal immigrants should be removed from the country. Not only did Noah refuse to let his sons marry these foreign women, but he even refused to help a woman who was caught in a trap. Noah had the opportunity to save her, but instead, without a second thought, allowed her to be trampled to death. This represents the Tea Party desire to drastically cut foreign aid. Aronovsky felt that these issues are of such importance, that he ignored the Bible's account, where the sons have wives that went into the ark. To the radical right, political agenda is more important than scriptural accuracy.

One of the most important issues to the ultra-conservative is the second amendment right to bear arms. Aronovsky tackles this issue with full force. From an extremely loose interpretation of a single word in Genesis 6:4, he creates the Watchers, massive beings made of rock whose purpose is to protect humanity. When the rains begin to fall, an army of evil men attack Noah and his family in an attempt to steal the ark. The Watchers ward off the attackers, destroying dozens in mere seconds. Clearly, the Watchers represent Aronovsky's desire for the legalization of assault weapons and the capability of killing dozens of people in mere seconds. For self defense, of course.

But what about the controversial scene that, on the surface, appears to support evolution? Noah tells his family the story of creation. As he narrates the creation of animals, the audience views a visually-impressive sequence where a small animal crawls from the water and evolves, eventually progressing to a gorilla, as Noah recounts the creation of man. On the surface, this appears to suggest the radical theory of theistic evolution, where “The Creator” set evolution in motion, which most ultra-conservatives oppose. However, the evolution taking place in this sequence is not that of animals to humans, but the evolution of the United States government. Tea Party members strongly believe in a less powerful centralized government. Yet, they feel that the federal government is progressively becoming stronger, invading the business of private firms, over-regulating markets, and interfering with the lives of normal citizens. The federal government has evolved from a small creature to a giant gorilla, which will soon grab the United States and climb the tallest skyscraper, only to come crashing down.

Perhaps a review of Noah as Darren Aronofsky's attempt to advance the ultra-conservative agenda via cinematic propaganda seems preposterous. It's not nearly as preposterous as the film itself. There is one clear relationship between Noah and the Tea Party: God is nowhere to be found.