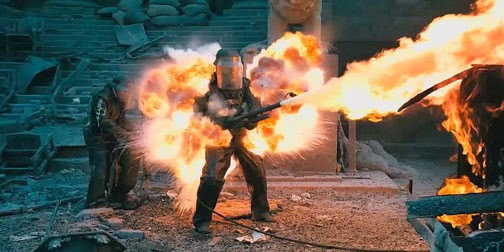 A Review of Stalingrad

The Volga river. It is a clear night. The full moon glows over the river and the city of Stalingrad. A light mist floats over the calm river. A line of soldiers walks across the water.

It is revealed shortly after that a bridge had been built just below the surface so as to be invisible to the German soldiers who occupied the city on the other side of the river. But, for a moment, Stalingrad leads the audience to believe that Russian soldiers walk on water. This moment perhaps best symbolizes the film.

Visually, the film is fantastic. Shot in IMAX 3D, the film is clearly highly-influenced by American action and war films. Most of the CGI is top-notch (better than some American films). Massive, sweeping, overhead shots of the city look real. The film is worth viewing solely for the 3D, CGI spectacle. It is clear that director Fedor Bonderchuk and the crew put the highest effort into the film, which is more than can be said of most American action films. It's too bad the plot is weak. Still, it's a surprisingly decent film, and definitely worth a watch.

The Battle of Stalingrad was one of the bloodiest battles in modern human history, in which the entire city of Stalingrad became a battleground. The film focuses on one single building on the river. A young woman, Katya (Mariya Smolnikova), is the only Russian citizen left in the building, choosing to remain in hiding long after everyone else had evacuated or been killed. A small group of Russian soldiers infiltrate the building and kill the German soldiers occupying it. The soldiers meet Katya, and become her protectors.

Like Enemy at the Gates (2001), also about the Battle of Stalingrad, Stalingrad hones in on a few people on each side, providing a personal perspective. Both films show the impact and importance of one person. Enemy at the Gates shows how one man raised the moral of millions of Russians. Stalingrad shows why he and others fought. The soldiers protect Katya. She is the mother of the narrator; clearly a symbol for “Mother Russia.” The small group of soldiers protect their country and its people, and a seemingly insignificant building is vital to the war effort and to the survival of Russia.

Any war film, and practically any film, for that matter, glorifies the “good guys” and exaggerates the “bad guys.” History, of course, shows us how bad the Germans really were, but the exaggeration in Stalingrad is of 1940's proportion. The Germans have a problem with lice, which the Russian soldiers have solved. The Germans struggle with lice throughout the film. Near the end of the film, the dying German colonel says he feels nothing, except the itching of the lice. Not only are the Germans too incompetent to eradicate the lice, but so evil that they have no feelings as they near death.

The main villain is a German officer who has discovered a Russian woman who reminds him of his deceased wife. He not only rapes her, but becomes infatuated with her. The Russians who live with the woman ridicule her for sleeping with the German. This might seem cruel, but she begins to show affection towards the German. Her punishment is execution by a Russian sniper. It is a disturbing fate for a woman who was in constant danger and tried to protect herself, and whose rape undoubtedly caused severe emotional trauma. She should not be punished for her feelings, but as far as the film is concerned, she is no better than the German who rapes and kills Russians.

As horrible as the Germans are depicted, the Russians are equally glorified. Besides walking on water, they perform other superhuman feats. One soldier banks an explosive shell off a tank, sending it around a corner at a group of Germans. Early in the film, the Germans set fire their fuel supply to ward off a Russian attack. A massive, fiery explosion half a mile wide seems to consume everything around. However, burning Russian soldiers emerge from the flames, firing their rifles and throwing their burning bodies at German soldiers.

At first glance, Stalingrad's glorification of Russian soldiers, beyond that of normal war films, seems simply like over-the-top film making. However, it is also evidence of Russia's (and Putin's) inferiority complex. For a century (or more), Russia has desired to be a world power, yet in world wars depended on world powers for survival. The Cold War was a struggle for power. The Soviet Union gained its power through nuclear weapons, yet internal struggles and hardships showed that it would never become like the United States under communist rule. Now, decades after the fall of the Soviet Union, Russia still feels inferior to the U.S. The record-setting cost of the Sochi Olympics was an attempt to showcase Russia as a modern country and as a world power. The current struggle in Ukraine is Russia's attempt to flex its muscles. These all show Russia's (and Putin's) inferiority complex, which it often attempts to combat in rash ways, such as throwing money at an Olympics or invading a sovereign territory.

Stalingrad's depiction of the Germans shows not only Russia's hatred towards Germany during World War II, but its lingering jealousy towards the country. Germany, responsible for two world wars and the death of tens of millions of Russians, is more prosperous than Russia today. The United States supported Germany while squabbling with the Soviet Union during the Cold War, and Russia today resents it.

Stalingrad is an attempt to showcase Russia as a cinematic world power. It was the first non-American film to be shot in IMAX 3D, and indeed looks and feels like an American action/war film. The glorification of Russian soldiers is an attempt to showcase Russia's superiority, or at least put Russia on the same level as the United States. The Russian media is controlled by the government. Undoubtedly, the government heavily influenced Stalingrad and its glorification of Russia. The film releasing right when Russia has been constantly in the news (Olympics and Ukraine) is no coincidence. The film is part of Putin's blitz to assert Russia as a world power.

Though the film was very successful in Russia, Americans ignored the film. It grossed around half a million dollars in the U.S., which is what most American action films make in a few hours in their opening weekend. Stalingrad could have been made by an American production company, with English-speaking actors, and been at least moderately successful. Perhaps the Russian production companies (and perhaps the Russian government) thought that Stalingrad would be a sweeping success in the United States, putting Russia on equal footing cinematically with the U.S. It did not, and it will be interesting to see what the Russian inferiority complex produces next.