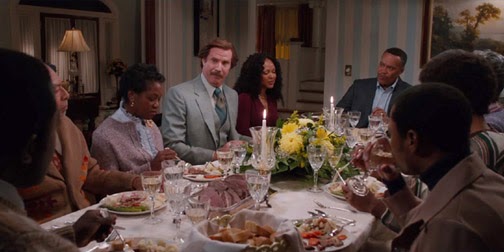 Tell the People What They Want to Hear

A Review of Anchorman 2: The Legend Continues

There is a pivotal scene in Anchorman 2: The Legend Continues where newscaster Ron Burgundy (Will Ferrell) is desperate to win the sweeps week ratings battle. Against all likelihood, his revolutionary 24-hour news network, GNN, has risen to the top of the ratings. GNN's rival network’s news is anchored by Burgundy's ex-wife, played by Christina Applegate. She has landed an interview with Yasser Arafat, and Burgundy and GNN nearly accept the impossibility of winning sweeps week against such a monumental interview. Suddenly, a car chase appears on a local feed, and Burgundy is struck by inspiration. He calls for the chase to be broadcast, while he provides dim-witted commentary. GNN has now completed its journey from sensationalist news network to outright ratings harlot.

This scene had me, self-professed cable news hater, smiling and chuckling at the commentary on those networks which I loathe. At that moment, when I finally began to enjoy the film, I was instructed on why this scene was funny. Voice-over explained that car chases were once not a part of news broadcasts. To the slightly educated audience member, even those with O.J.'s white Bronco as a childhood memory (or even younger movie-goers) this is obvious from watching the scene. The voice-over is unnecessary and insulting. Writer/director Adam McCay assumes the audience's ignorance, and kills all hope of the scene as legitimate media commentary.

This infantile treatment of the audience occurs at numerous points throughout the film. In another near-attempt at media commentary, Burgundy and crew are planning to run a story about parts that fall out of airplanes mid-air. The CEO of GNN, who happens to own this particular airline, catches wind of the story and kills it. "We call this 'synergy,'" he instructs us. The word is thrown around another couple times by different characters, just in case we didn't catch what McCay was feebly attempting to comment upon.

In an early scene, Burgundy attends a memorial service for Brick (Steve Carell), his former weatherman who has been missing and presumed dead. Brick appears and begins to lament at his death. Carell provides genuinely humorous outbursts to the worn-out Tom Sawyer bit, but these outbursts are rudely interrupted by Burgundy and his crew notifying Brick that he is not dead, repeatedly. McCay treats the audience as too ignorant to understand the humor on their own, and he does it multiple times throughout the film.

There are a handful of moments where Anchorman 2 is reminiscent of the ultimate media commentary film, Network. In the 1976 film, UBS news ratings jump after Howard Beale’s “bullshit” rant, and Faye Dunaway tells her boss that Beale is speaking what every American feels, and they should keep Beale on the air because it will draw massive ratings. In one momentous scene of Anchorman 2, Burgundy, struck by genius, decides to stop reporting the news and tell America what they want to hear. In Network, Faye Dunaway proceeds with a brilliant monologue that is simultaneously humorous and intelligent. In Anchorman, the broadcast is followed by a joke about domestic abuse.

Though Anchorman 2 poses as a commentary on cable news networks, the film is really self-reflexive, a commentary on itself. News networks are in a powerful position, one that could be used to ensure viewers are knowledgeable of important current events worldwide, keep watch on politicians and corporations, and promote media literacy. Instead, they ignore globally consequential events in favor of scandals, promote synergistic interests, act as pawns of politicians, and thrive on media illiteracy.

McCay is in a powerful position as director of a sequel to a hugely successful film, one that is assured to draw massive audiences. The plot of the film lends itself perfectly for legitimate media and social commentary that could genuinely provoke the audience to be skeptical of cable news networks and question their own media literacy, while simultaneously providing intelligent topical humor (and even a reasonable amount of lowbrow humor). Instead, he uses flimsy commentary as a facade for his own sensationalist tactics, such as Burgundy playing the flute while ice skating, Brick's impulsive outbursts, and the random street battle with numerous celebrity cameos, to extract cheap laughs. The Yasser Arafat interview is Network; intelligent and important. The car chase is Anchorman; mindless and sensational. The car chase wins the ratings battle and replaces the interview. Anchorman 2 has the potential to be an intelligent and humorous commentary on cable news and media, but instead McCay chooses the approach that draws the larger audiences. He tells the people what they want to hear, just like Burgundy.

Anchorman 2 is not only self-reflexive, but a commentary on the film industry as a whole. The unending barrage of comic book movies, Fast and the Furious sequels, and raunchy teen comedies make money with almost no risk, and audiences cheer them like they do Burgundy’s ‘Merica speech. There is little room in today’s Hollywood for a film like Network. Studios choose profit over provocative, and perhaps with good reason. Spike Lee’s 2000 attempt, Bamboozled, was a strange, yet remarkable satire of race in the media. It was also a massive commercial failure. The audience for such intelligent satirical films is dwindling, and will only continue to do so if such films are not made.

Anchorman 2’s use of racial humor is precisely what Spike Lee was satirizing in Bamboozled. A scene in which Burgundy shares a meal with a black family features Burgundy unrestrainedly uttering extremely racist remarks. It’s supposed to be funny, and indeed it drew massive laughs from the mostly-youthful, white audience. To the socially conscious audience member, however, this scene is appalling. These remarks by Burgundy in 1980 are not far exaggerated from statements I have heard in 2013. This scene follows the Family Guy formula: exploit the rampant insensitivity of white, young, adult males with extremely offensive material that is not far exaggerated from their own thoughts and opinions. The minstrel show in Bamboozled should have appalled audiences, but instead the show became massively successful. Likewise, the dinner scene in Anchorman 2 should have appalled the audience, but instead provoked colossal laughter, and was even featured in the trailer.

At times, Anchorman 2 presents itself as a provocative commentary of the television industry, in the spirit of Network. There are numerous moments that flirt with becoming brilliant media satire, but McCay’s infantile treatment of the audience, characters yelling uncontrollably for no reason, racist humor, or a poop joke always reminds us that this is just another lowbrow comedy. As a commentary on the television industry, Network, produced three decades ago, is far more relevant today than Anchorman 2.
Posted by Unknown at 8:24 AM