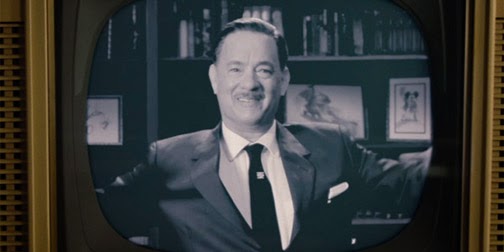 A Review of Saving Mr. Banks

Prior to viewing Saving Mr. Banks, I had several preconceptions. As a film about Disney, by Disney, I knew it would be loved by Disneyphiles, and probably not-so-loved by the less romantic who look beyond the magic at the monstrous media conglomerate that Walt Disney's once-modest animation studio has become. I knew it would unabashedly promote the Disney brand. I expected it would glorify Walt Disney, whose morality was more questionable than his public persona reveals (though his racism is debated, he was known to use racial slurs and was interested in hiring Nazi propagandist Leni Riefenstahl). As such an important film for Disney, I also expected a high-quality film. Under no circumstances would Disney allow this film to utilize less than outstanding production values and storytelling. I was correct on most accounts, but the film genuinely surprised me in several aspects.

The film centers not on Walt Disney (Tom Hanks), but on Mary Poppins author P.L. Travers (Emma Thompson). It is quickly revealed that the only person Travers truly cares for is Poppins. She refuses to hand Disney the rights to her book, despite the unprecedented creative control he has conceded to her. Travers is first portrayed in the film as an unpleasant, almost despicable character. Her condescending treatment of every single person she encounters makes her instantly unlikable, and she is unlikable for refusing to give up her story as much as her unpleasant nature. This precisely fit the mold I expected: Disney just wants to make children happy and fulfill a promise to his daughters, while the snobbish author stands in his way at every opportunity. Travers is portrayed early in the film as both protagonist and villain, her British elitism even a threat to America. Disney is the true hero, the gentle patriarch of America's most beloved institution.

In the first static shot of Travers, she sits in front of a white-curtained window. She is framed in the shot between the literal frames of the window. A few shots later, she is framed again, filmed from outside, gazing out a window at nothing in particular. In her next shot, the camera stands in another room. Travers stands peering out the window, which she is framed within. She is also framed between two identical lamps. In the foreground, the door frame provides a third frame.

This framing employed by director John Lee Hancock is closely reminiscent of the technique famously employed by Orson Welles in Citizen Kane. In the famous deep-focus shot early in the 1941 film, child Kane is playing in the snow outside. The camera stands inside, where his parents argue about him. Kane is framed within the window and between his parents, who he has literally come between. Welles frames adult Kane at various times throughout the film as well, within windows or door frames. This symbolizes Kane's isolation and entrapment.

Likewise, in Saving Mr. Banks, Travers is framed to show her own isolation and entrapment. The shot that features three different frames is a powerful image that shows her entrapment is multi-layered. At first, it appears she is trapped simply by her own unpleasant nature and her refusal to compromise. Hancock frames her several other times throughout the first half of the film. Only when she cuddles with a giant stuffed Mickey Mouse, symbolizing her consent to Disney, does the framing, and her entrapment, cease.

Around this point in the film, we realize that Travers is not as much a villain as first perceived. The highlight of the film is its inclusion of flashbacks to Travers' childhood that center around her relationship with her father. Through these flashbacks, we learn her inspiration for Mary Poppins, as well as the source of her cold behavior. Her father's extreme alcoholism dominates Travers' memories of her childhood. As more of her painful childhood is revealed, she transforms from unlikable to sympathetic character.

Her father's alcoholism, the source of her entrapment, is revealed as Travers begins to relent to Disney. She begins to break free of the painful memories only when she allows Disney to produce Mary Poppins. But she is not yet completely free. When she discovers that the penguins will be animated despite her adamant opposition to cartoons, she confronts Disney, hands him the unsigned agreement, and leaves the studio. After this confrontation, she has returned to where she began: on the verge of financial ruin because she will not give in to Disney. Consequently, the framing returns. A car window and a door frame in her home again convey her return to isolation and entrapment.

As she sits at her kitchen table, face to face with the giant stuffed Mickey Mouse and contemplating whether to sign the agreement, a door frame again surrounds Travers. After she signs the agreement, the angle changes. But she has still not yet completely let go. She is later framed by the hotel entrance and the window of her limo, which brings her to the only place where she can truly let go: the premier of the film. Her final framing occurs in the entrance to the Chinese theater, wherein she watches the film. It moves her to tears, and with the new-found satisfaction that Disney has done justice to her characters, she finally completely breaks free of the entrapment caused by her painful childhood memories. The film's underlying message is this: only when one gives in to Disney completely, even emotionally, can one truly be happy.

The film fulfilled all of my preconceptions. Saving Mr. Banks is exceptional. There is no denying the quality from an entertainment standpoint. As expected, Saving Mr. Banks is essentially a barefaced endorsement of the Disney culture that pervades every aspect of hundreds of millions of lives across the world. Walt Disney is largely glorified. However, the clever use of framing to portray Travers' feelings of entrapment and the interspersing of flashbacks to gradually sympathize the audience with her added a complexity to the film that was unexpected. The film's underlying message, however, evidences that Saving Mr. Banks is just another cog in the Disney propaganda machine.
Posted by Unknown at 6:11 AM