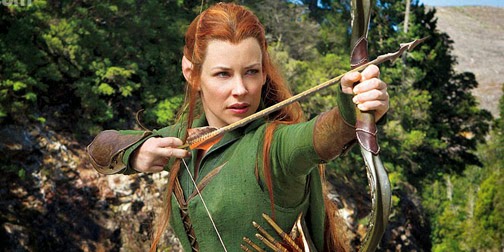 A Review of The Hobbit: The Desolation of Smaug

Peter Jackson's decision to break The Hobbit into three films caused an uproar among fans. Few were convinced that the roughly 300 page book held enough material for three films. The first installment, An Unexpected Journey, confirmed these convictions for most audience members and critics, with its numerous unnecessary action scenes and piled-on infantile humor. The second film, The Desolation of Smaug, contains less of the humor, but the gratuitous action remains. Both films feel thin, and it is clear that three films is too excessive for this relatively simple story.

The decision to make three films, however, did allow Jackson and company freedom to add completely new plot lines to Tolkien's story. The most intriguing addition is Tauriel the elf. Tolkien's Hobbit had no prominent female characters. Middle Earth, reminiscent of Europe in the middle ages, and the 1930's patriarchal world in which Tolkien wrote the book, did not need strong female characters. There are plenty of opportunities for females in The Hobbit. If written today, Smaug, the great and powerful dragon, would be perfectly suited as a woman. Even one or two of the dwarves could be female, with their manly builds and beards, and the story would remain unchanged. However, Tolkien chose to omit females from The Hobbit. However, Lord of the Rings, the massively successful, quasi-sequel trilogy to The Hobbit which Peter Jackson completed a decade ago, has three significant female characters. Each has varying aspirations of power and breaking free of the patriarchy, but each ultimately becomes docile and domesticated.

Galadriel is an elf queen, ruling with her husband. Her beauty is emphasized, especially by Gimli the dwarf, who develops a slight, innocent infatuation with her. Tolkien began to write Lord of the Rings after World War I and the decline of the British empire. The King and Queen gave way to the Prime Minister and Parliament. In Lord of the Rings, Galadriel is this sort of symbolic ruler. Behind the scenes, she influences Frodo, but in the films does little beyond providing supplies and advice for the travelers. She is tied to her kingdom and to her husband. Unsatisfied with her role, she flirts with taking the ring which Frodo has offered, to become more than just a co-ruler of her kingdom, but a mighty queen to rule over all of Middle Earth and break free of her husband's influence. She quickly abandons her Cleopatra-like aspirations and soon leaves Middle Earth entirely, conceding to the patriarchy and all possibility of becoming more than a docile queen.

Like Galadriel, Arwen is an elf of royalty. Arwen is the daughter of the lord of another elf kingdom. Unlike Galadriel, Arwen has no aspirations of political grandeur. She is in love with Aragorn, a human and the heir to his kingdom. This is no political betrothal, she is legitimately in love with Aragorn and shows no interest in the political implications that accompany marriage to him. Her father forbids this relationship. He knows that if Arwen binds herself to Aragorn, she will lose her elven immortality. Arwen at first submits to her fathers wishes, nearly leaving Middle Earth with her elven brethren. She then makes her only independent decision of the films, to stay and marry Aragorn, against her father's wishes and against even Aragorn's advice. In the end, of course, her father recants his apprehension of this marriage, and she does marry Aragorn. Only then, for the first time in the films, does she become truly happy, now that she is married. Her domestication brings her true joy.

The other female character in Lord of the Rings is Eowyn. She is a human, niece of the king, and possible heir to the throne after the king's only son dies. Eowyn falls in love with Aragorn. She is heartbroken with the knowledge that Aragorn is betrothed to Arwen, yet clings to the glimmer of hope that Aragorn will love her. When she realizes that this is impossible, she suppresses her feelings of love with a desire to fight in battle. She wishes to defend her people, but soldiering is a man's duty. Her uncle, the king, forbids her to fight. Rebelling against the patriarchy, Eowyn sneaks off to battle. On the battlefield, she is injured, penalized for reaching beyond her role as a woman. In recovery, she falls in love, finding her only possible role in the patriarchy, the arms of a man.

In The Desolation of Smaug, Tauriel differs greatly from the females in Lord of the Rings. Galadriel, Arwen, and Eowyn were characters in the books, and thus Jackson and company were obligated to keep them relatively unchanged. Tauriel was created entirely for the film, and therefore the writers had the flexibility to create a female character who does not conform to the patriarchy of Middle Earth.

Tauriel is beautiful and badass. She is reckless and ruthless. She is as fierce a warrior as any male. She is not of royal blood, and therefore unconcerned with politics and princes. She is a warrior, leader of the elven guard. When her king orders her to stay inside the kingdom, she does not hesitate to ignore him to kill orcs and save the dwarves. She fights the patriarchy.

Tauriel is not uninterested in men, however. Her exchanges with Kili the dwarf are a nod to Gimli and Galadriel, but taken to another level. Kili becomes infatuated with her. Whereas Galadriel merely ignores Gimli, Tauriel actually reciprocates, internally toying with the idea of a relationship with the dwarf. It seems more of a curiosity at first, an act of sexual deviance, an interracial relationship with the enemy of her Aryan people. But when Kili is injured and poisoned, only elf medicine can save him. Tauriel tracks down and kills countless orcs to reach and save Kili. Her curiosity has turned to genuine attraction. The Desolation of Smaug ends here, and only time will tell where this attraction leads in the next film. However, clearly this is not the love story of Arwen or Eowyn. Tauriel does not need love. She seems more attracted to the exotic idea of forbidden love than to Kili himself. Tauriel is unafraid of satisfying her personal desires and rebelling against the patriarchy.

Unlike the docile women of Lord of the Rings who need their men and conform to the patriarchy, Tauriel is a modern, 21st century woman. She pursues her desires and does not need a man to be happy. She is a warrior. She is not Sleeping Beauty or Snow White. She is a woman in the contemporary spirit of Brave and The Hunger Games. With Tauriel, Peter Jackson and company have thrust the modern, powerful woman upon the patriarchy of Middle Earth.
Posted by Unknown at 8:23 AM