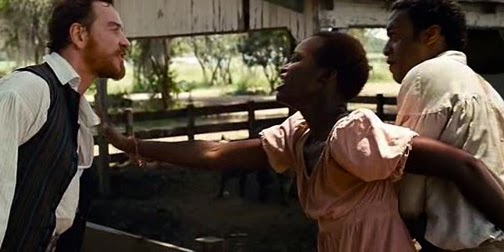 A Review of 12 Years a Slave

Some films leave us speechless.

Just before the climax of 12 Years a Slave, there is a close up of Solomon (Chiwetel Ejiofor). Very slowly, he changes the direction of his gaze. Eventually, thunder claps. Nothing else happens in the shot, which lasts well over a minute.  This shot perfectly personifies the power of the film. Solomon is speechless. His gaze changes direction, so he is not in deep thought, but appears as if he is simply taking a minute to absorb the previous twelve years of his life. Likewise, during this shot, I, as an audience member, simply gazed at the screen, not in deep thought, but simply let the previous two hours assimilate into my consciousness.  The shot is simple, subtle, and beautiful.

Conversely, there is a shot just ten minutes prior where Solomon whips another slave, Patsy (Lupita Nyong'o, in her stunning film debut).  In one single hand-held shot, nearly five minutes long, Patsy is tied to a post and stripped.  The master, Edwin Epps (Michael Fassbender), forces Solomon to whip her.  He does, but not with full force.  Epps pulls a gun on Solomon, who relents and whips Patsy with all his might.  He quits, and Epps grabs the whip and brutally and relentlessly lashes her.  He finally ceases, and Solomon goes to Patsy as she falls to the ground, massive gashes in her backside.

This shot is as powerful as any shot in any film.  It is brilliantly choreographed, acted, and filmed, and the complete antithesis of one of the most famous whippings in film.  In The Passion of the Christ (2004), during Jesus' flogging, the audience is subjected to spattering blood and pieces of flesh being ripped apart.  It is a powerful scene, but the shot in 12 Years a Slave is much more subtle, and more moving.  Director Steve McQueen extracts incredible performances from his actors.  The audience is more deeply affected by Solomon's facial expressions, Patsy's cries, and Epps' rage than by the gore of Passion.

Much of 12 Years a Slave's brilliance stems from the contrast between the two shots previously described.  McQueen juxtaposes beauty with brutality.  Shots of serene bayou landscapes follow shortly after shots of hangings.  The plague of caterpillars that kill Epps' cotton plants perfectly showcases this juxtaposition.  Caterpillars, cold-blooded plant-killing machines, contrast with the pure, white cotton.  The cotton is the United States, not pure because of whiteness, but because of Democracy and the principals the country was founded upon.  The real plague is not caterpillars, but slavery.

There are tragically too few historical films like 12 Years a Slave that tackle race issues head on and appeal to both wide audiences of all races.  All too many films that attempt to tackle race issues actually perpetuate notions of white supremacy.  The "help" in The Help (2011) is not the black female housekeepers and nannies, but the help that the white protagonist gives to those black women.  Despite the numerous despicable whites in the film, in the end white film goers can feel good knowing that there were white people willing to help blacks who seemingly could not help themselves.  In 12 Years a Slave, Solomon does require the help of a white man, a Canadian who is apprehensive about the simple act of writing a letter.  He is an afterthought.  Solomon alone is the reason he survives.  He is a powerful black character, even while a slave.

12 Years a Slave, about a free black man taken into slavery, is a fantastic story.  In a Hollywood starved for new ideas, it is shameful that so few films exist about slavery and the Civil Rights movement.  There are countless incredible stories that could provide studios with films like 12 Years a Slave that not only move audiences, but educate them.  Films reach massive audiences, and educate those who will not seek knowledge themselves.  In a politically-polarized society where racism is still rampant, black history is barely taught in schools.  As an aspiring history teacher with a film background, I realize film's power to educate.  Ten minutes of 12 Years a Slave will create a lasting impression of life as a slave that a forty-minute lecture could only dream of.  Films like this need to be much more prevalent.  Of course, Hollywood needs more black directors with both the capacity for excellent film making and the willingness to make films that appeal to all races.  Tyler Perry and Spike Lee are very influential directors, but Perry appeals mostly to blacks, while Lee's films are not made for massive commercial success and reach smaller audiences.  Steve McQueen is the sort of director Hollywood needs to properly bridge black history with popular film.  I greatly anticipate his next attempt at leaving me speechless.
Posted by Unknown at 9:49 PM