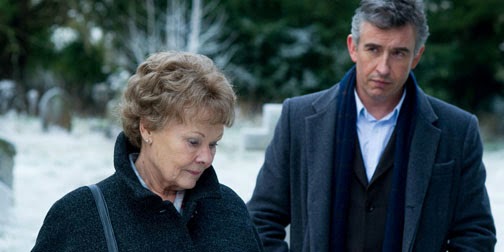 A Review of Philomena

Early in Philomena, teenage Philomena, attending a fair, gazes at her distorted reflection in a funhouse mirror.  The mirror then distortedly reflects the face of a teenage boy, who proceeds to sweet-talk the young girl.  We soon find out that Philomena “took (her) knickers down” for the boy and became pregnant.

The funhouse mirror not only shows that the boy had perverted intentions, but it symbolizes the distorted views of the Catholic church as depicted in the film.  The sisters neglected to tell an orphan girl anything about her body, and she knew nothing of the risks of pregnancy (not that 1950’s nuns would have condoned birth control, anyway).  When the baby is born, the nuns refuse to bring in a doctor, even though the baby is breech.  They insist that Philomena is paying penance for her carnal sin.  Later in the film, we see the convent cemetery, where young girls and babies that did not survive the birthing process are buried.  Those girls that do survive are forced into slave labor, only able to leave if they produce money that they have no opportunity to earn.  The children are sold to Catholic American couples, who are told that the mothers abandoned the children.  Even in her later years, Philomena still holds to the distorted beliefs that the nuns were inherently good, that she was just paying the price for her sins.  The church had held the mirror in front of Philomena her entire life.

Elderly Philomena (Judi Dench) enlists the help of a shamed BBC reporter, Martin (Steve Coogan, who also shared writing duties) to find her long-lost son, Michael.  They return to the convent, where it is revealed that all records of her son’s adoption were destroyed in a fire.  This is highly reminiscent of The Omen, when hospital records of Damien’s birth were also destroyed in a fire.  Philomena’s son is not the antichrist, but he became an important official in the Reagan and Bush administrations, like Damien becomes politically involved in The Omen III.  Michael was gay, so perhaps he was a sort of antichrist for the Reagan-era Republican party.

As it turns out, the fire that destroyed Michael’s adoption papers was a bonfire, where nuns purposely burned documents that would allow mothers to find their children.  They did keep the contract Philomena signed that stated she would never attempt to seek her son.  The nuns prevented Philomena from finding her son, and also prevented Michael from finding his mother.  After cleverly-justified product placement from Guinness reveals that Michael was interested in his Irish heritage, we learn that Michael had traveled to the convent to find his mother.  They had told Michael that his mother had abandoned him, and they had no record of who she was.  Even in the end, when Martin and Philomena return to the convent to confront the nuns, Sister Hildegarde condemns Philomena for her uncontrollable libido, justifying the actions of the nuns and the church.  It is a distorted view of sin, indeed.

This lambasting of the 1950’s Catholic church is sprinkled within a wonderful “odd couple” story.  Martin and Philomena are polar opposites, and it makes for many humorous moments.  Martin quotes T.S. Eliot and enjoys a good Pinot Grigio, while Philomena enjoys romance novels and is excited to watch Big Momma’s House.  Of course, being a British film where the characters travel to Washington D.C., there are the obligatory potshots at the United States.  Philomena worries that her son died in Vietnam, or was crippled and homeless, or a drug addict.  Worst of all, though, is the worry that he became obese from the massive American portions.  I couldn’t help but laugh.

Philomena is the rare film that is humorous, heartwarming, and heartbreaking, while having something important to say.  Coogan and Dench harmonize beautifully (though I thought Dench’s accent was at times inconsistent).  There are a few questionable moments, such as Michael’s former partner’s unexplained Jeckyl and Hyde act and Philomena’s immediate acceptance of Michael’s homosexuality (despite her uber-strict Catholic values).  However, the weaknesses are few and forgivable.  Philomena may criticize the distorted mirror of Catholic values, but the film’s own reflection is beautiful.
Posted by Unknown at 7:41 PM