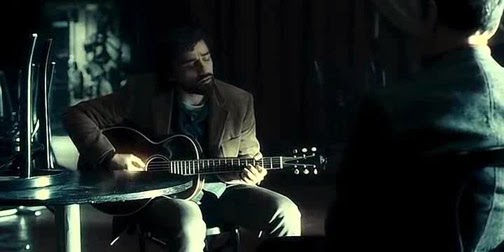 A Review of Inside Llewyn Davis

“I don’t see a lot of money here.”  These are the words of a Chicago club owner upon hearing Llewyn Davis (Oscar Isaac) perform “The Death of Queen Jane.”  The song is hauntingly beautiful, and, if one pays attention to the lyrics, tear-jerking.  Set in the dark, empty club, this is a moment of pure, melancholy beauty that perfectly represents Inside Llewyn Davis.  The club owner responds to such a moment with his only concern: money.  Llewyn knows that his performance was wonderful, and he responds with a befuddled “ok.”  The owner appreciates Davis enough to offer him a job playing in a trio, singing harmonies, but knows that Llewyn solo will not be profitable.  Llewyn refuses to compromise his artistic integrity and leaves the club to hitchhike back to New York.

Inside Llewyn Davis is as much about the film industry in 2014 as it is about folk music in 1961.  The club owner might as well be a major studio executive talking to a young, ambitious filmmaker who has just pitched a unique idea for a film.  One could easily imagine the Coen brothers pitching Inside Llewyn Davis and eliciting a similar response.  Llewyn Davis is so vastly different from the Coen brothers’ previous film, True Grit, a film that, as a remake of a John Wayne western, was practically a guaranteed money maker.  Llewyn Davis is a film about a folk singer wandering aimlessly through life.  It’s not exactly a recipe for commercial success, and apparently it took some time for the Coens to find an American distributor.  And, after finally releasing across the country, the film has not been commercially successful.  And that’s fine with Joel and Ethan Coen.  They, like Llewyn, refuse to give in to commercial demands.

The most memorable character in the film, besides Llewyn, is the cat.  Near the end, the cat’s name is revealed to be Ulysses, a clear reference to The Odyssey, given the plot of Llewyn’s journey (and the Coen’s history).  The Hobbit is a current odyssey trilogy that represents the commercial side of the industry.  There are many similarities between the films (besides Llewyn sounding like a hobbit name).  Both Bilbo and Llewyn rely on their friends and random people whom they meet on their journeys.  Both depend on a tool for survival (guitar and ring).  Both films deeply concern wealth.  And, ultimately, both characters return to where they began (there and back again).  Of course, Llewyn is a much more cynical return than The Hobbit’s storybook ending.  The Hobbit is the very sort of film Llewyn is critiquing, one small story stretched into three films that will collectively gross near a billion dollars in the United States alone.  Peter Jackson is Llewyn’s friends who turn to commercial music.  They will make money, but at the cost of their artistic integrity.

Roland Turner (John Goodman) is a critique of films on the opposite end of the spectrum: art films with zero commercial appeal that draw audiences who only watch art films.  Turner’s ridiculing of Llewyn for his relatively simplistic music might as well be a film festival snob who feels the Coen brothers are too commercial.  In reality, Inside Llewyn Davis is, like Llewyn’s music (and the Coen brothers’ films in general), the perfect middle ground between artsy and commercial.

There is conflict within Llewyn.  Though he fights for his artistic integrity, he struggles to make a living as an artist.  He participates in a recording session for a catchy tune about space travel, “Please Mr. Kennedy.”  He dislikes the song, but needs the money.  Llewyn perhaps sells out to record on this song, but his low point comes later.  When he is pressured into playing at a dinner gathering and his deceased musical partner is mentioned, in a fit of rage he yells that he only makes music for a living.  He reduces his art to its commercial value.  He has discarded his music as art, reduced it to a job, but even so it makes him little money.  Perhaps the Coen brothers’ “Please Mr. Kennedy” was True Grit.  They may not have made the film for monetary purposes, but undoubtedly they knew it would have commercial success.  Despite Llewyn’s disgust with the song, he appears to actually enjoy performing it, at least ever so slightly.  Likewise, I found myself smiling and bobbing my head.  The Coen brothers probably enjoyed making True Grit, as I enjoyed watching it.  There is nothing wrong with catchy songs and popcorn movies.  They are indeed fun, but they should not destroy thought-provoking films and music for their lack of financial return.  Not long after recording the catchy song and denouncing his music, Llewyn regains himself and travels to Chicago, where he beautifully plays “The Death of Queen Jane.”  Likewise, Joel and Ethan Coen have traveled far from True Grit, and have beautifully made Inside Llewyn Davis.

Recently, the Academy nominated nine films for Best Picture.  Inside Llewyn Davis was not one of them.  This deplorable act is actually very fitting, given the film’s nature as commentary on popular entertainment.  The Academy was happy to nominate True Grit in 2011, and this year total commercial films like Gravity and Captain Phillips, as well as faux-art films like American Hustle and The Wolf of Wall Street.  Like Llewyn refuses to give in to commercial demands, undoubtedly this Oscar snub and commercial failure will not deter the Coen brothers from making the films they desire to make, wonderful fusions of art and entertainment like Inside Llewyn Davis.
Posted by Unknown at 1:27 PM