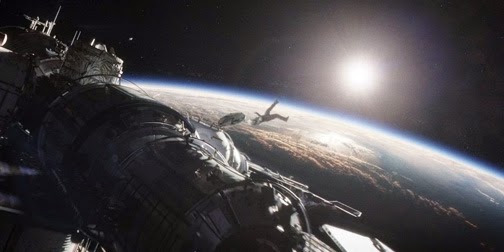 A Sight to Behold

A Review of Gravity

There is a brilliant shot in Children of Men where a five people ride in a small car. They make small talk, play with a ping pong ball, are attacked by an angry mob, and chased by police. The shot clocks in at nearly four minutes. The camera is inside the car, moving and rotating to film all of the action. A custom rig was built, and the single shot took twelve days of production time. The result is one of the most incredible shots in any film, and the defining moment of director Alfonso Cuaron's career.

In Gravity, Cuaron attempts to upstage the famed Children of Men shot with a thirteen minute long opening shot. The shot takes the audience from beautiful outer-space serenity to destruction and chaos, as astronauts Stone (Sandra Bullock) and Kowalski (George Clooney) are sent flying through space, struggling to survive and return to Earth. The shot is incredible, but when one considers the only non-digital creations in the shot are the actor's faces which were digitally plastered into the space helmets, its impressiveness pales in comparison to the Children of Men shot. The shots are reflective of their respective films.

Children of Men doesn't need much CGI. The plot is incredibly compelling, the acting is wonderful, and the cinematography is breathtaking. The choreography of the long takes are nothing short of amazing. The entire film if fantastic in just about every way. Gravity, of course, has to be heavily dependent on CGI (enough so that it might qualify as an animated feature). And it is gorgeous, truly a sight to behold. Cuaron ensured every bit of CGI looked perfect, and it shows. Visually, few films, CGI or not, look as beautiful as Gravity. But would the film have near the same impact without the 3D and big screen?

No. The visuals are so incredible, they distract from the film's issues. Bullock is solid as Stone, but many actresses could have played the role with equal impact. There is a difference between a great performance, and a great character in a well-made film. Clooney, however is absolutely perfect in his role. Acting aside, the major problem with the film is its utter predictability. The film constantly asserts that Stone will survive. When she nearly commits suicide, there is absolutely no suspense, because the audience has been told throughout the film that she will return to Earth. There are many suspenseful moments in the film, but they are just moments. It is not a question of if, but how she will return to Earth. It is disappointing that Cuaron did not create some ambiguity. Also disappointing are the cliches. Kowalski's fate was obvious the moment the audience learns that this is his last mission. Not only was his sacrifice unnecessary and cliched, it unfortunately contends that the female protagonist cannot survive without the help of a man. This is reiterated again when Stone almost commits suicide. Kowalski returns, in the form of a hallucination, to encourage her to keep going. Even in her mind, Stone needs male help to survive. In Children of Men, Kee, the only pregnant woman in the future infertile world, needs Theo to survive. However, she is the source of life and the hope of humanity. Theo is like a queen's guard, performing his duty (in this case for the good of humanity), rather than the cowboy saving the damsel that is Kowalski in Gravity.

Weaknesses aside, Gravity is a beautiful film. Never has space looked so real. Cuaron should be commended for his commitment to realism. Gravity is worth viewing for this reason alone. However, similar to Avatar, those who missed out on the theatrical release will likely not be as moved. Bullock and the predictable plot are not strong enough to carry the film to cosmic levels without the big screen and 3D. Personally, I will choose to let my theatrical experience be my lasting memory of Gravity. But if I ever again have the opportunity to see it in 3D on the big screen, I will not miss it.
Posted by Unknown at 6:51 PM