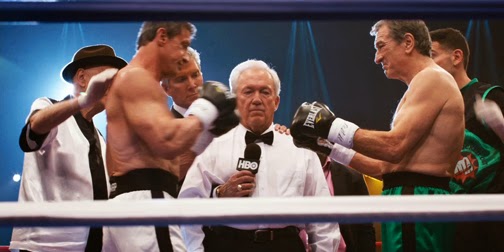 A Review of Grudge Match

"I always told ya, boxing and women don't mix."  So says Moe Howard to Curly in the classic 1934 Three Stooges short, Punch Drunks.  This sentiment has been echoed in many boxing films since.  In Raging Bull (1976), Jake LaMotta (Robert De Niro) is an endlessly jealous husband, convinced that his wife Vicky has cheated on him.  LaMotta is extremely verbally abusive towards her, and physically aggressive with almost every man who gets near her.  He is unable to confine his aggression to the ring, and Vicky divorces him.  In Rocky II (1979), Rocky (Sylvester Stallone) retires from boxing, due to health problems, and marries Adrian.  When Rocky decides to fight again despite the extreme health risks, Adrian refuses to support him.  An argument with Rocky's brother about the fight causes pregnant Adrian to faint and fall into a coma.  Boxing almost kills Adrian.  Both films showcase the difficulty, indeed impossibility, of a boxer holding a real relationship.  Boxing and women don't mix.

Grudge Match features De Niro and Stallone as a pair of former boxers, now in their sixties.  Their bitter arch-rivalry, both in the ring and out, has left both men with unresolved hatred that can, of course, only be resolved in the ring.  The film naturally liberally references Raging Bull and Rocky, but the first three-quarters of the film actually bears more resemblance to Punch Drunks (perhaps best symbolized by De Niro's pre-training physique, almost identical to that of Curly).  At times, Grudge Match closely resembles the slapstick physical comedy of the Stooges.  When "Kid" (De Niro) and "Razor" (Stallone) circumstantially meet for the first time in decades, a comedic fight ensues.  Several of these zany physical altercations occur throughout the course of the film.

Most of Grudge Match's humor is comprised of awkward sex jokes and obvious age gags, but there are some genuinely funny moments, particularly when Stallone and De Niro sing the national anthem at a real monster truck show.  My personal favorite was the use of a song that was featured in a series of erectile dysfunction medicine commercials (this joke was lost on the rest of the audience).  Ultimately, however, Grudge Match delivers fewer genuine laughs in two hours than Punch Drunks does in seventeen minutes.  As the film progresses, though, it proves to be more than an endless string of geriatric jokes, and morphs into a moral tale.  Kid is a heavy drinker and womanizer, and he pays for it.  The emergence of his son, B.J., (Jon Bernthal) causes Kid to change his ways, but he relapses, brings his grandson to a bar, and chooses a loose woman over his grandson.  Kid consequently loses his relationship with his son and grandson.

In the film, Razor's hobby is to weld pieces of scrap metal into small dog sculptures.  Razor remarks that in the rusty scrap metal he sees something beautiful.  Likewise, amidst the rusty scrap metal that is Grudge Match, something beautiful emerges, in the form of a single shot.  In this shot, B.J. emotionally energizes his father prior to the fight.  The shot is a closeup of the two, but due to a mirror, Kid's head is in two places, both the center and left side of the frame, while B.J. is on the right.  In the surreal shot, Kid on the left speaks to B.J. on the right, with Kid in the middle.  Kid is literally between himself and his son, a perfect visual representation of his reality.

The morality of Grudge Match reaches its climax in the ring.  Kid punches Razor with his back turned, and Kid is scorned by B.J.  Before the fight, Razor is revealed to be blind in one eye.  The loss of half of his peripheral vision gives him a major disadvantage that could be exploited if Kid were to discover the weakness.  During the fight, B.J. is told of the blindness.  B.J. informs Kid, not to exploit the weakness to win the fight, but to urge Kid to fight Razor straight on.  Kid cannot be satisfied if he wins an unfair fight, and so he heeds B.J.'s advice.  This melodrama in the ring also features each boxer helping the other up.  Kid and Razor have put aside their differences, fought fairly, and are happy regardless of the outcome of the fight.

The moralistic messages of Grudge Match are a paradox, however, because the film occasionally exhibits some rather poor judgement on the part of the filmmakers.  Multiple oral sex jokes that play on a nine-year-old's naivety are both unfunny and in poor taste.  The depiction of blacks in the film is also questionable.  The most prominent black character is Dante, the fight promoter.  Kevin Hart, with his best Chris Rock impression, plays the overly-obnoxious black man amongst whites, with the obligatory "white people" jokes.  He is completely self-serving, concerned only with his image and making money.  Likewise, LL Cool J plays a trainer who refuses to train Kid, until he realizes the potential for promoting his gym.  The only morally upstanding black character is Razor's friend and former coworker, who only has about a minute of screen time.  The portrayal of blacks in Grudge Match is unfortunate, especially in a film with such assertive moralistic messages.

Moe's advice to Curly about boxing and women is as relevant to Grudge Match as any boxing film.  Thirty years ago, Razor was in love with Sally (Kim Basinger).  She had an affair with Kid (ultimately the source of the feud).  In the film, Razor realizes that Sally left him because he spent months away training.  Boxing and women don't mix, and Razor chose boxing, so he lost Sally.  In the film, their relationship is rekindled, but when Razor's half-blindness is revealed, Sally initially refuses to support his reckless decision to fight.  Ultimately, she realizes that for Razor to mentally let go of boxing, he must go through with the fight, and she supports him.  Still, because boxing and women don't mix, one thing remains until Razor has completely given up boxing: Razor and Sally only kiss after the fight is finished.
Posted by Unknown at 7:12 PM