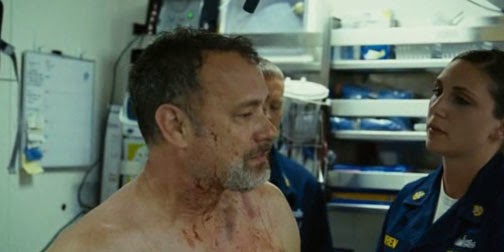 A Review of Captain Phillips

By Daniel Carstens
Captain Phillips begins with a portrait of the Phillips’ Vermont home.  This portrait is serene.  Dense woods provide a backdrop to the white, two-story house.  A gentle breeze gliding through the trees is the only movement.  This portrait is also sterile.  The trees are still bare during the dawn of the northeastern spring.  The day is overcast, filtering a pale, blue-grey light over the scene.  This single shot is the last moment of serenity in the film.  It is not the last moment of sterility.

Director Paul Greengrass is best-known for his Bourne films, and the uber-shaky, handheld camera cinematography.  For Captain Phillips, Greengrass tones down his signature style slightly.  There are no shots that are so shaky the picture is indiscernible, but nearly every medium and close up in the film is handheld, beginning with the shots of Phillips (Tom Hanks) and his wife.  This is a unique aesthetic choice.  We have grown accustomed to handheld action shots that accentuate the thrills of car chases and fights.  Usually, exposition and dialogue at the beginning of a film are static, camera-on-tripod shots.  In Captain Phillips, Greengrass uses the handheld camera to perfectly place the audience in the minds of Phillips and his wife.  The dialogue, while mundane, expresses the characters’ anxiety at Phillips’ upcoming trip around the horn of Africa.  They know the danger, and their unease is felt by the audience through the handheld camera, which is always subtly in motion, conveying the characters’ anxiety even before the audience knows exactly where Phillips is journeying.

The handheld shots continue as Phillips begins his journey captaining the freight ship.  Simple shots of dock workers and the ship’s innards are unstable, continuing to make the audience feel uneasy, anticipating the crisis to come.  Juxtaposed with these are wide shots of the shipyard and the ship casting off on its journey.  These massive shots, filmed in IMAX, provide a stark contrast to the handheld closeups of Phillips and the crew.  Still, they are usually filmed from a helicopter or fast-moving boat, so that even portraits of the ship on the vast ocean still have movement, continuing to make the audience feel uneasy.

The film has an interesting and unique visual style, to be sure.  But this style continues for over two hours, without letting up.  A few extended moments of a static camera peering out at the ocean would give a change of pace, like the serenity of the opening shot.  But they do not exist, and the result is that the film chugs along towards the end, like a freight train, only stopping when it reaches its destination.  The film is a half-hour too long, drawing out the lifeboat hostage situation for an hour and repeating quarrels between the pirate captain and his unstable accomplice.  Once the military entered the film with its machine-like, procedural handling of the situation, I really began to empathize with Phillips.  When they finally killed the pirates, I was almost as exhausted and relieved as he was.

Thankfully, after that moment, Hanks saves the film with his acting.  His performance in the last five minutes of Captain Phillips is among the most memorable of his career (and gives some validity to the outrage of his Oscar snubbing).  He finally shows real emotion in the film.  Previously, Hanks’ portrayal of Phillips is rather bland.  This is intentional, as it matches the character, who follows procedure and takes few chances.  His approach to handling the pirates is limited to encouraging them to take a break for some water to give his crew time to turn off the lights.  He leaves the bravery to his crew, who forcefully overtake one of the pirates and nearly diffuse the situation.  Phillips eventually gets desperate and takes action, but futilely, and when the military is already about to kill the pirates.  Phillips is not an extraordinary man, and likewise Captain Phillips is not an extraordinary film.  Phillips and the film both have their moments, but both are ultimately unspectacular.

Besides Greengrass’ aesthetic choices (particularly the handheld camera), the casting is perhaps the most interesting aspect of Captain Phillips.  The film’s title shows its focus, on the Captain himself, not on the crew or the situation.  Thus, a big star like Hanks is the perfect casting choice.  Hanks is the only star, surrounded by unrecognizable actors.  It makes the audience focus on Phillips, as the film does.  Hanks rewards the audience in the end, with more fantastic acting in five minutes than the entire cast in American Hustle, and ultimately saves the film, like the military saves Captain Phillips.
Posted by Unknown at 5:38 PM