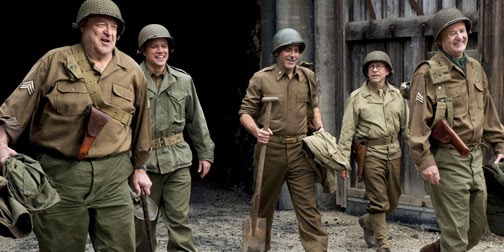 A Review of The Monuments Men

In perhaps the best scene of The Monuments Men, Walter Garfield (John Goodman) and Preston Savitz (Bob Balaban), middle-aged soldiers on a crusade to save art, find themselves in a stand-off with a lone German soldier. Walter passes around peace cigarettes, and finally the guns are lowered. The German soldier, who has not uttered a word, smiles and says, “John Wayne.” This scene is fantastic in its fusion of high drama and humor, and perfectly illustrates some very important underlying themes of the film.

At multiple points in the film, Frank Stokes (George Clooney) verbalizes the main theme, and the purpose for their mission: Culture is important. It shows how people live and who they are, and were. Culture is worth fighting for. At one point, Stokes, in regards to Hitler's hoarding of paintings and statues, says that art does not belong to one man or people, but to all people. Art transcends political boundaries and can and should be available for all to appreciate.

The “John Wayne” moment portrays this beautifully. John Wayne, famous for his very specific, uber-American western roles, is known all over the world, even by a German soldier. This scene not only shows art's ability to transcend political boundaries, but to unite people across those boundaries. John Wayne was the only non-cancer-causing manner in which the German and American soldiers connected. John Wayne was a peacemaker. Art has the power to bring people together, as it does for many characters in the film, such as priests and the soldiers, and James Granger (Matt Damon) and Claire (Cate Blanchett) in their wonderful scenes together.

Perhaps this is partly why Hitler wanted all of the art. By removing art, he not only took away peoples' identities, but he removed this unifying force. He wished to bring tens of thousands of art pieces to Germany, thereby uniting the art world in Germany, as he also strove to do geographically. In World War I, among many German atrocities were the complete destruction of many significant culture centers, including libraries and museums. In World War II, Hitler, the failed art school student, understood the importance of art. He did not wish it destroyed. So, unlike World War I, Germany stole art. Was this simply Hitler's selfish indulgence, or did he actually wish to leave peoples' identities in tact (at least while they were under German control)?

Near the end of the film, after Germany had surrendered and tens of thousands of works of art were recovered, one last threat remained. Much of the art was stashed in the Soviet-controlled part of Germany. The Soviets were seizing art as reparations, rather than returning it to where it came from as the Americans did. The war in Europe had ended and the Soviet Union was taking over, but the Monuments Men had just discovered the last, and most important, stash of art. In a highly-dramatized scene, the men rush to load the art into trucks as a Soviet convoy drives to the mine. It is a classic race-against-the-clock scene. The Soviets, stern-faced (with music to perfectly accompany their evil intentions), become the villains who wish to take the art for themselves, the art that belongs to all people. From the film's perspective, the Russians are little better than the Germans. This short scene evidences my own observations that the Cold War mentality still exists in the United States.

Decades after the fall of the Soviet Union, the rift between the United States and Russia is still strong. Many films, such as Mission Impossible II (2000), The Sum of All Fears (2002), Quantum of Solace (2008), and Indiana Jones and the Kingdom of the Crystal Skull (2008) (as well as conservative media outlets) all show that the Cold War mentality is still prevalent. Even the recent Olympics, created to harmoniously bring together all nations, are not immune. President Obama sent three gay athletes to represent the U.S. at the games, simply to spite Putin. The hockey game between the U.S. and Russia was much more than just a game. The players represented their countries in a battle for superiority. T.J. Oshie was labeled a hero. Athletes are not labeled heroes often. The country rallied around Oshie and the hockey team in its victory over Russia, proving U.S. superiority. Even though the Cold War is decades past, the mentality continues, as the end of The Monuments Men shows. As the Soviet convoy arrives at the cave, a giant American flag awaits them. This provoked cheers from the audience.

One of the issues The Monuments Men tackles is whether these men were truly soldiers. Early in the film, the men land on the beaches of Normandy in a boat, just as American soldiers did many months before. Many of these shots are filmed similarly to the famous Saving Private Ryan (1998) Normandy scenes. However, when the men exit the boat, nothing is shooting at them. When they arrive on the beach, the landscape looks similar to Private Ryan, bare with barbed wire, but the bodies and the bullets are missing. The men meditate for a brief moment. Clearly, in this scene, the men feel insignificant compared with the thousands of soldiers who lost their lives on that very beach.

As the film progresses, the men find themselves in real danger, such as the “John Wayne” scene. Later, two of the men are killed, and, as Clooney's voiceover points out, the men prove they are real soldiers. The voiceover, thinly justified as briefing the President or talking to the men, is the film's major flaw. The Normandy scene perfectly shows their inadequacy as soldiers without voiceover, and the audience did not need the voiceover to understand that the men are truly soldiers when they begin to die for their cause. Interestingly, the men are not soldiers because they fight. No weapons are fired in the John Wayne scene. One man dies while fleeing a fight. The other fires his weapon to save a piece of art, but he is a poor shot and is killed. The men are soldiers because they put their lives on the line. One does not have to fight to be a soldier.

The John Wayne scene reminds us of something else: film is art. It is not simply part of our culture, but the most significant art form today, because films are widely appreciated far more than any other art form. Just as many paintings require more thoughtful consideration to appreciate, so does film. Critical response to The Monuments Men has been largely indifferent. Most feel that the film fails in its attempt to be both humorous and dramatic. There is some validity to these opinions, but there are some truly humorous moments, as well as some truly harrowing moments. The critics who have dismissed the film have failed to look deeper than the surface. They fail to look at film as art, only considering the entertainment value. Film critics represent the widespread depreciation of appreciation for art throughout our entire society. One of the wonders of film is that it is simultaneously art and entertainment. A deeper look into The Monuments Men reveals a unique film that, while flawed, is both entertaining and thought-provoking.
Posted by Unknown at 6:13 PM