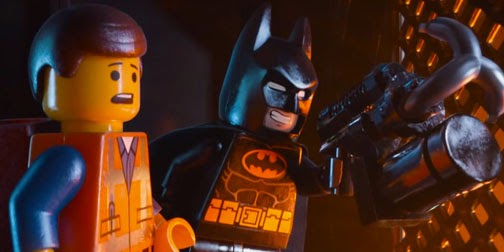 A Review of The Lego Movie

Of course, Business has an evil plot. His desire is to make the world perfect; at least, his view of perfection. He has imprisoned all master builders to rid the world of creativity. The remaining, ordinary citizens are happy to follow instructions in every aspect of life. However, there is a faction of rebel master builders who desire to free the world from Business' perfection. The group includes such extraordinary figures as Batman, Superman, Gandalf, Shaq, Michelangelo (the Ninja Turtle), and Abraham Lincoln. Yet, it is the most ordinary of figures, Emmet (Chris Pratt), who leads the group and saves the Lego world from Business' plot.

The Lego Movie tells the audience to be themselves, to be creative, to embrace what is special about themselves. It also tells the audience to question corporate America. Don't buy extremely overpriced coffee simply because everyone else does. Don't watch mindless sitcoms that are unfunny and rehash the same over-used jokes and plots. Question authority, especially those who act as if everything is awesome.

These are bold messages for a kids movie, especially when juxtaposed with the messages that Disney sends. Disney is exactly like President Business, trying to construct a perfect world where Disney pervades every aspect of life. Disney portrays itself as the unending source of magical joy and happiness, but this is a facade for the underlying corporate greed and an excuse to invade our entire lives. From printing Disney characters on newborn diapers supplied to hospitals to scooping up beloved film and comic book franchises, to owning major TV channels, theme parks, and cruise lines, to phone apps and endless merchandising, Disney is everywhere, telling us that everything is awesome if Disney is involved. Meanwhile, we pay significantly more for Disney stuff (every buy a Disney dvd or buy a ticket to Disney World?), just like the overpriced coffee. We watch anything Disney makes, even if it's an unimaginative sequel or spin-off (Planes 2!), like the “Where's My Pants?” sitcom in The Lego Movie that rehashes the same joke in every episode.

Consider the cornerstone of modern Disney films: The Toy Story franchise (with the fourth filmed as-yet unconfirmed but inevitable). The first film is a buddy story. The overt message is to trust in your friends. Who is your friend? Woody and Buzz are toys. It's a merchandising gold mine, not only because the film is about toys, but it explicitly tells us to trust in these toys. The toys are Andy's best friends. And, these particular toys, Woody and Buzz, are Disney creations. “You've Got a Friend in Me” is not just a nice song about friendship, it's an invitation from Disney, to trust (and buy into) Disney as much more than as entertainment, but as a friend, an important part of one's life.

Toys, à la Toy Story, allow for kids to use their imaginations, but in the manner that Disney wants them to. Legos, on the other hand, encourage kids to use their imaginations with few limits. Everyone who possessed an elaborate Lego set as a child knows that the sets were built to the instructions once or twice, then mixed with the other bricks to become new, one-of-a-kind creations. In the internet age, children need to be reminded to be creative. The Lego Movie is a wonderful encouragement of creativity, not only for kids, but adults as well. The film is also hilarious, even for adults. Milhouse from The Simpsons makes an appearance, as well as Billy Dee Williams as Lando Calrissian, and Shaquille O'Neal. These adult-oriented cameos, as well as smart dialogue and humor, assure that people of all ages can receive the film's messages. Everything is not awesome if a song, TV show, or company tells you so. Be creative! Draw, play music, or write. Make your own life awesome.