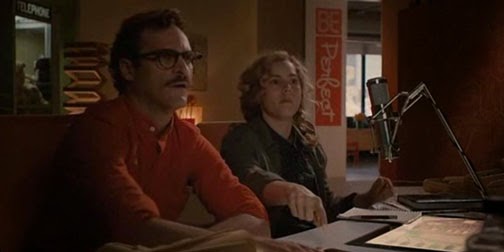 The Technological Erosion of Human Relationships

A Review of Her

Valentine's Day. I put the kids to bed and sat down to watch a movie. I had not been able to catch Her when it was in the theater, and my desire to watch all of the Best Picture nominees required me to download a bootleg. Going in, all I knew about the film was that Joaquin Phoenix played the lead role (which was extremely unusual, I knew at least the premise of all the other Best Picture nominees prior to watching). So, on Valentine's Day evening, I curled up in bed with my laptop and watched Her. I had no idea how ironic this was.

Her is set in the not-too-distant future. Theodore (Phoenix) works for a website that writes “handwritten” letters for people. He writes other peoples' love letters. A new computer operating system is invented (called OS 1, not-so-subtly nodding to Apple), that thinks intelligently and independently. It adapts and evolves. It verbally communicates with the user. It's essentially Siri, able to actually think and evolve psychologically. Theodore has been separated from his wife for a year, but has been unable to move on emotionally and sign the divorce papers. He occasionally interacts with women, but it is clear that he is unable to have a normal human relationship. Theodore gets his new OS and gives it a female voice. Samantha (as she calls herself, and voiced by Scarlett Johansson) becomes emotionally attached to Theodore, and he reciprocates. They begin to “date,” and the audience later learns that the practice of dating an OS is becoming extremely common. They fall in love.

Naturally, problems arise, which I won't delve into, but all is not perfect in his relationship, yet he will not give it up. His long-time friend, Amy (Amy Adams, in the role she should have been Oscar-nominated for) leaves her husband, over a meaningless argument. It is soon clear (to the audience) that she and Theodore have an emotional connection, but Theodore is so engulfed in his relationship with Samantha, and Amy begins to grow fond of her OS, that the two do not even consider a real, human relationship.

The themes are clear. Our technology often prevents us from having real human relationships. A walk across a college campus evidences this. About one in ten students will be walking while staring at their cell phone. It would not be a stretch to say that half of students sitting alone are engrossed in their phones. How many potential relationships are thwarted by technology? We may connect with more people now via social networking, but the number of relationships that transcend status updates and texting are decreasing. There is a website that tells us how long we have spent on Facebook since its inception, and for many the figure is measured in weeks. Online dating has led to plenty of relationships, but it removes the pre-dating human interactions of asking people out (even striking out is still interaction). While we have not yet reached the stage of dating our computers, it is not far from feasibility. I know people who are addicted to technology. Constant phone-checking, even at extremely inappropriate times, is rampant. Actual dating of technology is not far-fetched. Her's power is its believability.

Theodore and Samantha do genuinely connect emotionally. The effect is far different than Hal from 2001: A Space Odyssey, where intelligent computers that control our lives are to be feared. Writer/director Spike Jonze entices us with a relationship that is as genuine, perhaps more genuine, than most human relationships ever become. That is perhaps even more disturbing than Hal. If computers attempt to overpower us physically, we will fight back. When they overpower us emotionally, we don't even realize that anything is wrong. We still feel in control, even though the technology has overtaken us, to the detriment of our human relationships.

After the film ended, I realized the irony of my situation, watching Her while laying in bed with my laptop, on Valentine's Day nonetheless. And while having children gives me an excuse, it caused me to seriously ponder how technology interferes with my own human interactions. If texting and Facebook did not exist, would I make it a point to see my friends in person more often? If the technology for downloading movies to watch at home did not exist, would I have made it a point to see Her in the theater, around actual people? Would I have tried to get a babysitter and go out on Valentine's Day? If ebooks and online journal, newspaper, and magazine databases did not exist, would I visit the library more, around real people? What relationships have I missed out on because of technology? Her is a fantastic film that cannot be watched without causing one to question how technology has affected the human relationships in his/her life.