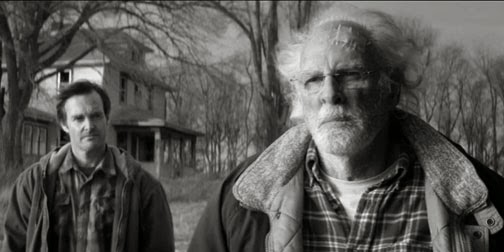 The Beauty of Banality

A Review of Nebraska

Anyone who has driven through Nebraska would likely agree that it is one of the least eye-appealing states in the U.S.  Boring would be an appropriate term, which would describe more than the landscape for many people.  My apologies to Nebraskans.  So, a film entitled Nebraska will not likely entice people to flock to the theater.  Indeed, it is a film that depicts the banality of midwestern life: farming, small towns, and uninspiring jobs.

In the film, Woody (Bruce Dern) is an elderly man who lives in Billings, Montana (only slightly more exciting than Nebraska, from the film’s perspective).  He is possibly in the early stages of Alzheimers, and believes he has won a million dollar sweepstakes.  His son, David (Will Forte), reads the letter, which is an obvious scam.  Woody often appears to be a bit incoherent, and he refuses to believe that he is not a millionaire.  He insists on traveling to Lincoln, Nebraska, where he is to pick up his winnings.  David eventually gives in, to make his father happy.

As the film progresses, the film suggests that Woody is perhaps not as senile as at first perceived, and that he might possibly realize that he is not winning any money.  It seems Woody is not really after money, but some excitement, a break from the monotony of his life in Montana.  The destiny of excitement?  Nebraska.  The film takes us through flat country and small towns.  Director Alexander Payne chooses to photograph particularly unexciting images: aged small town bars, dilapidated barns, intersections overhung with power lines, and flat, dull landscape.  Woody’s search for excitement brings him to a place even more dull than his home.  So why is he so hell-bent on going to boring Nebraska if he perhaps realizes that he is not a millionaire?

Woody grew up in the small, Nebraska town of Hawthorne.  Much of his family still resides there, or in the surrounding farm land.  David and Woody stop in Hawthorne for a visit.  Though Woody insists that he wants to move on to Lincoln, time with the family keeps him from attempting to walk there alone, which he had multiple times before.  Woody and David venture into an old bar, where Woody’s old business partner (who Woody insists stole his air compressor) drinks with old friends.  Woody joins them, and tells them of his fortune.  Woody becomes the toast of the town.

Though he did want the money to buy a truck and an air compressor, this is Woody’s excitement: returning home and seeing family and friends.  Even when he questions David’s desire to see his father’s childhood home and says he wants to move on to Lincoln, these are the only moments where Woody is content.  David had not been to Hawthorne since he was a boy.  Though it was only a day’s drive, Woody had hardly been home in decades.  As the end of life drew near, Woody simply wants to relive happier days past.  David realizes this, and buys Woody his air compressor that he will never use and his truck that he cannot drive (though David lets him creep down Hawthorne’s main street, just to show off).  As the number of elderly in our society are ever-increasing, the film encourages us to let them keep their dignity, and that the simple comforts of home are often enough to make them happy in their last years.

Few entirely black & white films have been produced by major studios in the last few decades.  Usually, the decision to go colorless results from the setting and subject matter of the film.  The Artist (2011) and Good Night, and Good Luck (2005) center around pre-color cinema and television, respectively, and the black & white was meant to aesthetically match the movies and television during the time they were set.  The Man Who Wasn’t There (2001) is a modern film noir, and the black & white gives the film a classic noir aesthetic.

Nebraska, however, is a modern film, set in current times.  Usually, such films in black & white are striving to emulate a style of film long ago, or just pretentiously artsy.  Nebraska is neither.  The black & white takes the boring images of Nebraska, the dull landscapes and the aged, small town buildings, and shows them to the audience from a new perspective.  Had the film been in color, the yellows and browns of the landscape and the old buildings would have been as utterly boring as one pictures when they think of Nebraska.  The black & white takes away the dull colors and allows us to see the true beauty of the images, resulting in striking photography.  The black & white enables us to see Nebraska through Woody’s eyes.  The banality of small-town, rural life is beautiful, even exciting, in its own way, that perhaps cannot be fully appreciated until one’s later years.
Posted by Unknown at 12:21 PM